For the Love of Community: John and Sally’s Volunteer Story

John and Sally first worked with Habitat in 1994, when a church group started coming in for weekends on Saturdays to build houses in the community. They were drawn to the hands-on work, the way they could see a difference made palpably in neighborhoods around Tucson.  Since retiring, John and Sally both share their talents with Habitat for Humanity several times a week.

Sally has volunteered at the Habitat front desk for the past three years and is known to sometimes tease the office by changing her name-plate to read “Dorothy” just to see if people will notice. John has served as a construction crew leader for the past three years, training and mentoring new Habitat volunteers. “Even when he’s not officially a crew leader, he crew leads,” says Cynthia Franklin, Volunteer Resource Manager at Habitat.

The couple has been married 44 years. “We’ve lived in the same house for 39 years and he still can’t hang things straight!” Sally says of John, laughing. “Luckily, Habitat has levels.”

Since retirement, the couple has devoted themselves to volunteering in numerous community organizations.  Sally even calls John’s car “his roaming toolbox.” He drives around town volunteering with Hospice, VIVA, local schools, the Community Food Bank, and other organizations.  When Sally leaves her Habitat post for the day, she heads over to the Newborn Intensive Care Unit as a cuddler, helping soothe infants who were born early or show signs of a health issue. It’s clear John appreciates the amazing work Sally does in the community. “She’s a very outgoing person who shares her talents and her skills with whatever project she puts her mind to,” John says of Sally. “And she does a good job – there’s no question about it.”

A former prosecutor who worked 32 years with the Attorney General’s Office, John loves to sing and has been a baritone in the Sons of Orpheus Choir since 1981. “I always say – it’s the cheapest therapy you can have,” John says, quick to mention a number of fantastic choirs in the community.

On top of their love for community service, John and Sally are avid travelers. “We have one son and family in London and one son and family in Singapore,” says Sally. She speaks fondly of their 5 grandchildren, including two brand new twin boys they can visit in Singapore. Traveling has been a lifelong passion for John. He’s been to Antarctica, the Galapagos Islands, Australia, and many other places. “He swears he’s been to Morocco,” Sally says, grinning. “So he’s been to all seven continents!”

But what’s truly amazing is John and Sally’s love of the community. Sally says, “We firmly believe in the whole Habitat idea of helping the working poor – that this is a concrete way to help our community.” Of all their engagement in the community, Habitat is the one they both share in. Reflecting on what makes their connection with Habitat special, John says, “You know you’ve accomplished something.  Every house that’s built and dedicated is an improvement in the community.” 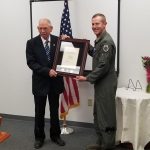